Sec.2, Voting Rights Act 1965; amended, 1982.  The amendment, (in italics) forbids voting restrictions that have the result, with or without the intent, of racial discrimination.    "No voting qualification or prerequisite to voting, or standard, practice, or procedure shall be imposed or applied by any State or political subdivision in a manner which results in a denial or abridgement of the right of any citizen of the United States to vote on account of race or color."

ON THIS PAGE
SECTION ONE: STATUS ALERTS
Current election law status by state; proposals, challenges, and rulings.
SECTION TWO: NUTS AND BOLTS
Election law basics and background.  What measures have been advanced, and what are their implications?
links
SECTION ONE:  STATUS UPDATES:

SECTION THREE: WHAT ARE THESE NEW MEASURES, & WHAT DO THEY MEAN FOR THE COUNTRY? 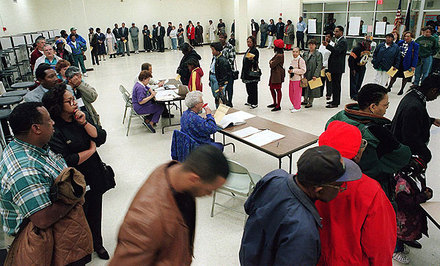 Tightening voter ID requirements.  Shrinking early voting hours.  Purging voter registration rolls.  Why are the proponents of these measures calling them ballot security measures, while voter advocacy groups call them voter suppression?  There have been so many changes made recently in election law that it's hard to keep up, or form an objective opinion about each one.  It's natural to wonder if these changes are as drastic or harmful as their opponents portray them to be.  What's wrong with having to show some ID at the polls?  How many early voting hours does a county need?  Why shouldn't the voter rolls be updated for accuracy?

As you evaluate measures being put in place across the country this election year, remember to ask these questions:

This section looks at four election law measures that are rapidly increasing in use across the country.  Each one has may have a negative impact on eligible voters.
1. Tightening Requirements for Voter ID
2. Reducing Early Voting Hours
3. Purging Voter Rolls
4. Assigning Volunteer "Poll Watchers".
Tightening Requirements for Voter ID
It's important to note that new Voter ID laws being implemented in several states are not simply requiring voters to provide some sort of identification at the polls.  Whether their state has previously had no ID requirements or very loose requirements, including anything from library cards to community center membership cards, most of these new laws require one specific type of government-issued photo ID, usually one issued by the state department of motor vehicles.

In order to obtain such an ID if you have never had one or have one that has been expired for more than one year, you must have possession of a raised-seal birth certificate, a Social Security card, and two forms of address confirmation, like a lease and a water bill.

Because these requirements have been demonstrated to create a barrier to the ballot for some voters, the onus is on those pushing for the changes to provide convincing justification.

Extensive research by numerous groups across the political spectrum has failed to produce evidence that voter impersonation has ever been successfully employed to impact an election.  There is no evidence of coordinated attempts at voter fraud that would have been in any way hindered by tighter ID requirements.

If the national consensus is evolving towards tightening voter ID requirements, then let's make sure we do it right.  During the upcoming non-election year, organizations interested in seeing changes made are welcome to make their case.  If they are able to rally public opinion in favor of tightening requirements, ideally they will work with voter advocates who are resistant to the changes, to satisfy concerns about voter suppression.  Perhaps the strictest form of ID requirements, the government-issued photo ID can be phased in, so that new voters can be informed when they register about what will be required, and current voters can find out at the polls what ID will be required next time they vote.  Perhaps a bar can be set for a % of registered voters who have successfully obtained the ID before the law takes effect.  Perhaps mobile centers can be set up in rural areas, housing developments, and retirement communities to raise awareness, provide instruction, and facilitate access to necessary documents and the ID card.  Perhaps a compromise can be reached about interim acceptable forms of ID as people are in the process of obtaining the stricter version.  The Help America Vote Act signed into law by President GW Bush in 2003 suggested such forms as student ID, work ID, bank statements, pay stubs, government checks and utility bills.

There is no justification to put new voter ID laws in place just before an election.

This is a new, slightly bizarre, and particularly insidious practice.  A Tea Party-affiliated organization called "True the Vote", based in Harris County, Texas, is recruiting volunteers nationwide to sign up for training and become self-appointed "election monitors."  Their stated purpose is to "protect the integrity of the ballot," with the idea being that if extra eyes are trained on both poll workers and voters as election day unfolds, there is less opportunity for "law-breaking and fraud."

Things to know about this movement:


The laws vary from jurisdiction to jurisdiction, but as of now, what they are doing is legal.  There are laws that date back almost to slavery, and were used, like poll taxes and literacy tests to discourage blacks from voting.  So far this particular organization has almost exclusively placed white poll watchers in black and Latino precincts.  (Election board officials are allowed to throw out volunteers once they create a ruckus, but they can't legally be removed for watching people obtain their ballots and vote.  I assume they are also not allowed to come close enough to a voter to see a ballot that is in use.)

Information on this phenomenon has been a little hard to find.  Various states are coming out with guidelines intended to minimize disruption and intimidation by these "citizen-led" groups.

I will continue to research the laws pertaining to and progression of this movement.  I welcome any contributions my readers may have - whether anecdotal or research-based, and any links or references would be great.